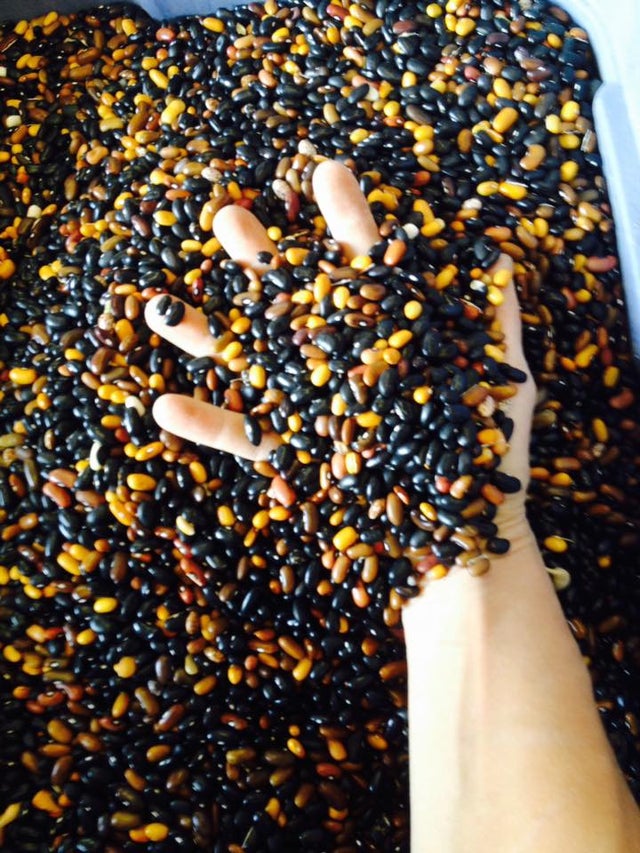 BEEFY RESILIENT WHATCOM GREX - Bush Dry Bean 100 days. (Phaseolus vulgaris X P. vulgaris/acutifolius) OSSI-Pledged Variety. Bred by Carol Deppe of Fertile Valley Seeds, in the Willamette Valley of Oregon. We have grown this out over multiple generations in Whatcom County and further selected it (gently, to retain a high amount of diversity) for early maturity in our farther-north climate. Along the way some white and some pinkish colored beans have popped up in the mix. These are not necessarily crosses, as according to Carol, others have seen these colors appear after a few generations as well. To account for the fact that our strain is not exactly what it started as when we adopted it from Carol, we have added the "Whatcom" to its name to represent our version. It remains our highest yielding and most flavorful bean!

The following is Carol's description of the foundation seed we began with:

"This is a segregating population of beans that represent the F5 and F6 of crosses between Gaucho common bean X Black Mitla “tepary.” (Note: Black Mitla has long been listed as a tepary, but its flower anatomy is intermediate between what is expected of P. vulgaris and P. acutifolius. I am guessing Black Mitla, an heirloom from Mexico and popular in the Southwest, actually resulted from a cross between the two species.) Gaucho, an Argentine heirloom, is a very early, very delicious richly flavorful gold dry bean. Black Mitla is a widely adapted bean with a powerful delicious flavor. Both are small beans round in cross section and about twice as long as wide. Both are easy to thresh. Teparies are unusually heat resistant and drought hardy, and are resistant or tolerant to diseases common beans succumb to. Common bean varieties tend to yield more.

In 2009 I was trying to do seed increases on the pure varieties, which I grew only 12 feet apart; they shouldn't have crossed if they were different species. In 2010, when I grew out what I expected to be pure gold Gaucho, about 5% of the plants produced black seed. Figuring that whatever the exact species identity of the parents, the cross was immensely interesting, I hand-sorted out several thousand black seeds representing those crosses and planted them in 2011 to produce Resilient Bean Breeder F3. These turned out to be the most productive dry beans I have ever seen. When I cooked up a pot of the mixed colors, the flavor blew me away. The beans taste more beefy than beef does. When the mix of all colors of beans proved so delicious just as is, I renamed the material Beefy Resilient Grex. The 2016 population is F5s and F6s from the original crosses. The plants are a mix of short-vined bushes and true bushes, mostly the short-vined bush types. They all hold their pods up off the ground and can be handled like bush beans. To harvest I clip or pull plants and roll up the tangled row-shaped mat of beans.

About ¾ of the beans are black; the rest are brown, tan, gold, or speckled. Maturity is a little later than Gaucho but still quite early. (Presumably there will be continuing segregation for plant type, maturity, drought resistance, disease resistance, and bean color and flavor.) I am selecting gently for earliness (by eliminating any plants that are not dry along with the main crop) but not selecting otherwise. I want this material to retain as much of its heterogeneity as possible so that it will be maximally useful for others to breed from. Save seed from the plants that do best for you and breed your own unique varieties adapted to your own needs and conditions. Or just use as a mix, as I am. This should be particularly good material from which to select varieties for short-seasons, cool or cold or hot summer weather, drought hardiness, yield, and disease resistance. (To cook Beefy Resilients, I soak for 24 hours with adequate stirs and occasional water changes; soaking time is variable, but they all swell completely in that time. Cooking time is uniform, about 45 minutes.) Bred by Carol Deppe."