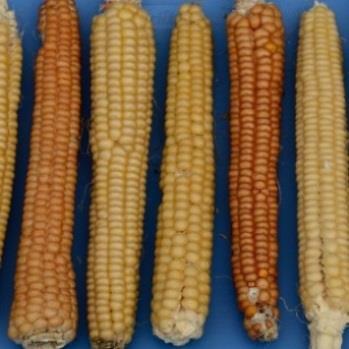 85 days. Open-Source-Seed-Initiative-Pledged Variety. Bred by Carol Deppe of Fertile Valley Seeds as a sister variety to Cascade Ruby-Gold. Carol's description of Cascade Creamcap is as follows:

"Characteristics of Cascade Creamcap are the same as for Cascade Ruby-Gold except for ear color and flavor. Cascade Creamcap has glassy white or peach-tinted white ears. This corn is the culinary and flavor equivalent of the classic Rhode Island Whitecap but produces bigger ears and more of them in spite of being a much earlier corn, and is much more widely adapted. The flavor is very mild and neutral, not like yellow corn at all. That neutral flavor is much better in situations where you want to taste just the other ingredients. I prefer CCC for eating with fine cheese or smoked salmon. (Regular yellow corn clashes with or detracts from these.) I also often prefer CCC when I use chunks of cornbread as a pasta substitute. (See recipes in The Resilient Gardener.). Makes great polenta. If you grow Cascade Ruby-Gold as an ornamental corn, a patch of Cascade Creamcap rounds out your color pallet.

Seed saving info: CCC has white endosperm, clear aleurone, and white or peachy-white pericarp. There should be no individual colored kernels, no black, no yellow, no sweet, and no floury or dent kernels. Flint kernels are glassy. To grow in the same field with CRG, give the CCC and CRG about 10’ (ten feet) of isolation. And if there is a consistent wind direction, plant the CRG upwind. Alternately, just plant the corns side by side, and save seed from the middle of each patch and eat the rows where the varieties come together. Any crosses from CRG onto CCC will show up as gold kernels in the white ears, so can be culled. Crosses in the other direction can’t be seen. But there is a little yellow still in the CCC, and a little white in the CRG anyway, since I developed both from the same material. So if you get occasional crosses but also cull out inappropriate ears regularly it will all work fine."